You can get the apks for the pre-release versions in 2 ways:

All testing builds have .ci.X at the end of the version name where 'X' is a number is incremented every time a new build is made. Builds are made when a new feature or bug fix is implemented.

There are two types of pre-release versions:

Introduction to the structure¶

All data structures that are persisted are passed around as one of two objects:

Every screen in the app has a view model and the view model interacts with one or multiple use cases (more below). The view model converts data that needs to be shown to the user into something that can populate the user interface. For example, the data values in the Action object isn't very useful to the user so this needs to be converted into strings and images that do mean something to the user. All the view models have a ResourceProvider dependency which is how they get strings, Drawables and colours from the resources without having to use a Context. This isn't a problem for configuration changes (e.g locale change) because the activity is recreated, which means all the resources are re-fetched in the view model.

The use cases contains all the business logic in the app. A use case interacts with the adapters and repositories mentioned below. A use case is made for everything that can be done in the app. E.g configuring a key map, displaying a mapping, configuring settings, onboarding the user. Most use cases correspond to something that the user can do in the app but some do not because they contain complicated code that is used in multiple use cases. E.g the GetActionErrorUseCase which determines if an action can be performed successfully.

Adapters and repositories contain all interactions with the Android framework (except UI stuff). This is so that tests can be more easily written and executed. Android often changes what apps are allowed to do and how so abstracting these interactions away means the code only needs to be changed in a single place. This means that the only place that a Context object is used is in Services, Activities, Fragments and the adapters.

Every package contains files related to each other. For example, everything (view models, fragments, use cases) to do with constraints is stored in one package. The only package which isn't a feature is the data package because it is useful to have some of the things in there together, e.g the migrations. The system package bundles all the packages which are related to the Android framework because there are so many. 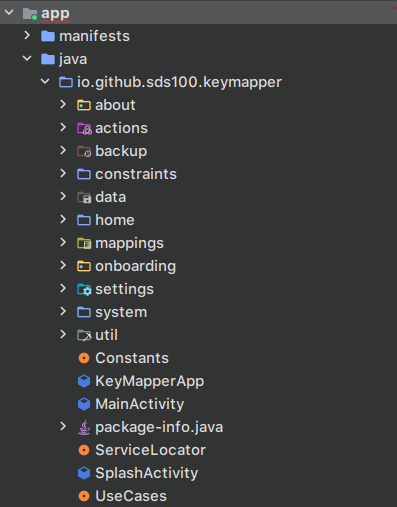 Every feature or bug fix commit should have an issue associated with it. This is a cue for the developer to plan what they are doing which improves efficiency. A feature should be split up into multiple tasks and each task should have its own commit. The feature should be developed on a separate branch and then merged into develop.

The README, License, Credits, Changelog and Privacy Policy files should just be changed in the master branch.

Additional labels can be used as a suffix. e.g "alpha".

The version code in the develop branch should always be the highest. Therefore, when a new version is released in the release branch, it should be incremented as well.

Fastlane is used to partially automate the releasing process. Follow the guide on the Fastlane website to set it up.

Only for the first beta release¶

You can translate this project on the CrowdIn page. Translations will be merged into production once they are >50% translated. If your language isn't available on the CrowdIn page then contact the developer so we can add it. Our contact details are in the footer of every page on this site.

We really appreciate translators so thank you! 🙂

It is important to use consistent language within the app's code and documentation. Make sure that your submissions comply with these standards. If you have noticed inconsistencies you can alert the developer with an issue or in the Discord. These standards don't need to be followed in places other than the documentation and source code. Follow this Material Design guide.

No title case unless it is the title of a webpage, section heading. No title case in the string resources in the source code at all.

Here are words and phrases that have been spelt inconsistently by the developer and everyone should follow these guidelines.

If a heading is for a particular feature then it should include the minimum supported Key Mapper version except version 2.0.